Vicenzo Scamozzi (September 2, 1548 – August 7, 1616) was an Italian architect and a writer on architecture, active mainly in Vicenza and the Venice area in the second half of the 16th century. He was perhaps the most important architect there between Andrea Palladio and Baldassarre Longhena.

Rudolf Wittkower called him “the intellectural father of neo-classicism”

Scamozzi was born in Vicenza. His father was the surveyor and building contractor Gian Domenico Scamozzi; he was Scamozzi’s first teacher, imbuing him with the principles of Sebastiano Serlio.
Trained by his father, he studied in Rome (1579-1580) and Venice (1581) and traveled widely through western Europe.

In addition to 15th and 16th century Italian treatise on architecture as well as others in French and German, Scamozzi read the works of Greek authors, in particular Aristotle, Plato and Euclid, as well as several Latin authors, including Plinio and Cicerone.
The classicizing influence of Andrea Palladio and Sebastiano Serlio is evident in the palaces, villas, and churches Scamozzi designed in Venice, Vicenza, Padua, and elsewhere in Italy.

His designs for villas and town buildings, which were sometimes adaptations of buildings by Palladio, influenced English Neoclassical architecture from Inigo Jones onwards.
Living and working in Vicenza, Scamozzi had the opportunity to see many of Andrea Palladio’s works. Palladio is depicted in Scamozzi treatise as one of the most important and innovative architect of his period.
Palladio died in August 1580, and Vincenzo Scamozzi was called upon to complete the project left unfinished like the Treatro Olimpico in Vicenza.
Scamozzi had already stepped in to complete Palladio’s other great unfinished project, the villa just east of Vicenza that is today known as La Rotonda. It is a mark of Scamozzi’s genius that both these projects are today regarded as being among Palladio’s most successfully executed works.

As architect to the Pisani family, Scamozzi established important contracts to the upper echelons of Venetian society.
His trip to Rome gave him an entry to those circles in which aristocratic clients moved.

With the help of Marcantonio Barbaro, who had been a friend of Contarini and an important patron of Palladio, he succeded in winning a competition for the design of the Procuratie Nuove

Scamozzi was also the author of one of the most comprehensive Renaissance treatises on architecture, the six-volume L’idea dell’architettura universale (1615), which exercised a wide influence in Italy and northern Europe.
“L’Idea dell’architettura universale” is the last Renaissance treatise in which architecture is regarded as an universal science that embraces all areas of society .
This claim is derived from the neo-Platonic idea of a geometrically ordered cosmos created by God.

Scamozzi was also an important theatre architect who tried to integrate stage settings into the surrounding space.
He completed Palladio’s Teatro Olimpico in 1585, the most ancient existing covered theatre in the world.

In 1575 he wrote his treatise “trattato sulla prospettiva” regarding his ideas on perception of spaces and stages.

The structure built in Vicenza to welcome Maria D’Austria, the design of the Sabbioneta theatre for Gonzaga family, the teatro del mondo at the entrance of palazzo ducale in Venice for Morosina Morosini Grimani, are among his most important works as a set designer.

Scamozzi’s sububan villas are well stuctured architectonical complexes constituted not only by buildings, but also by elaborate ouside areas: giardino, “brolo” (kitchen garden and cultivated land) “castaldia” (houses for the farmers) and by “barchesse”, storehouses.

Villas were actually working places and structured as farms, always with respect to the needs for “comodità (comfort) and “magnificenza” (splendour). 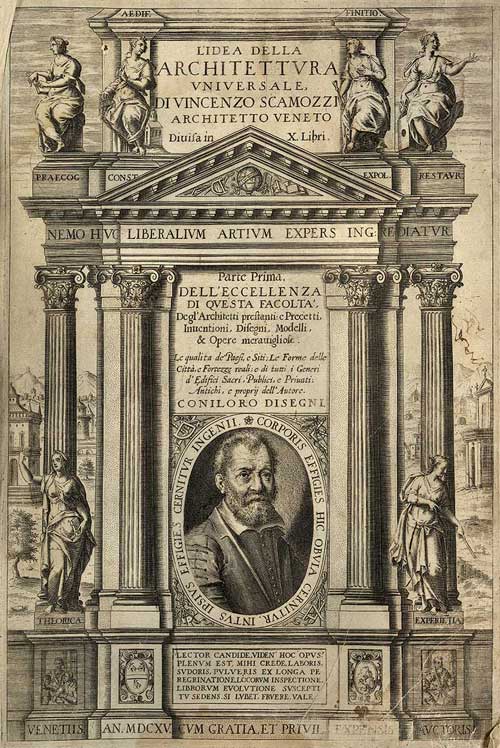 Scamozzi devoted great attention to land planning and to the relation between the interior and exterior part of the buildings.

The residential part (the villa) is always the most important element, bestowing prestige on the owner, so it has to be seen from far away, emerging from the surroundings but always in an harmonic relation with the natural elements.
The most important Villas built by Scamozzi, a part from Villa Molin, are La Rocca Pisana in Lonigo, Villa Duodo in Monselice, Villa Nani Mocenigo in Canda (Rovigo), which are all well structured and articulated architectural complex consisting of varius buildings and outside spaces.

The aim is to celebrate the family that lived there, combining “comodità” e “magnificenza”, building comfortable and magnificent houses. 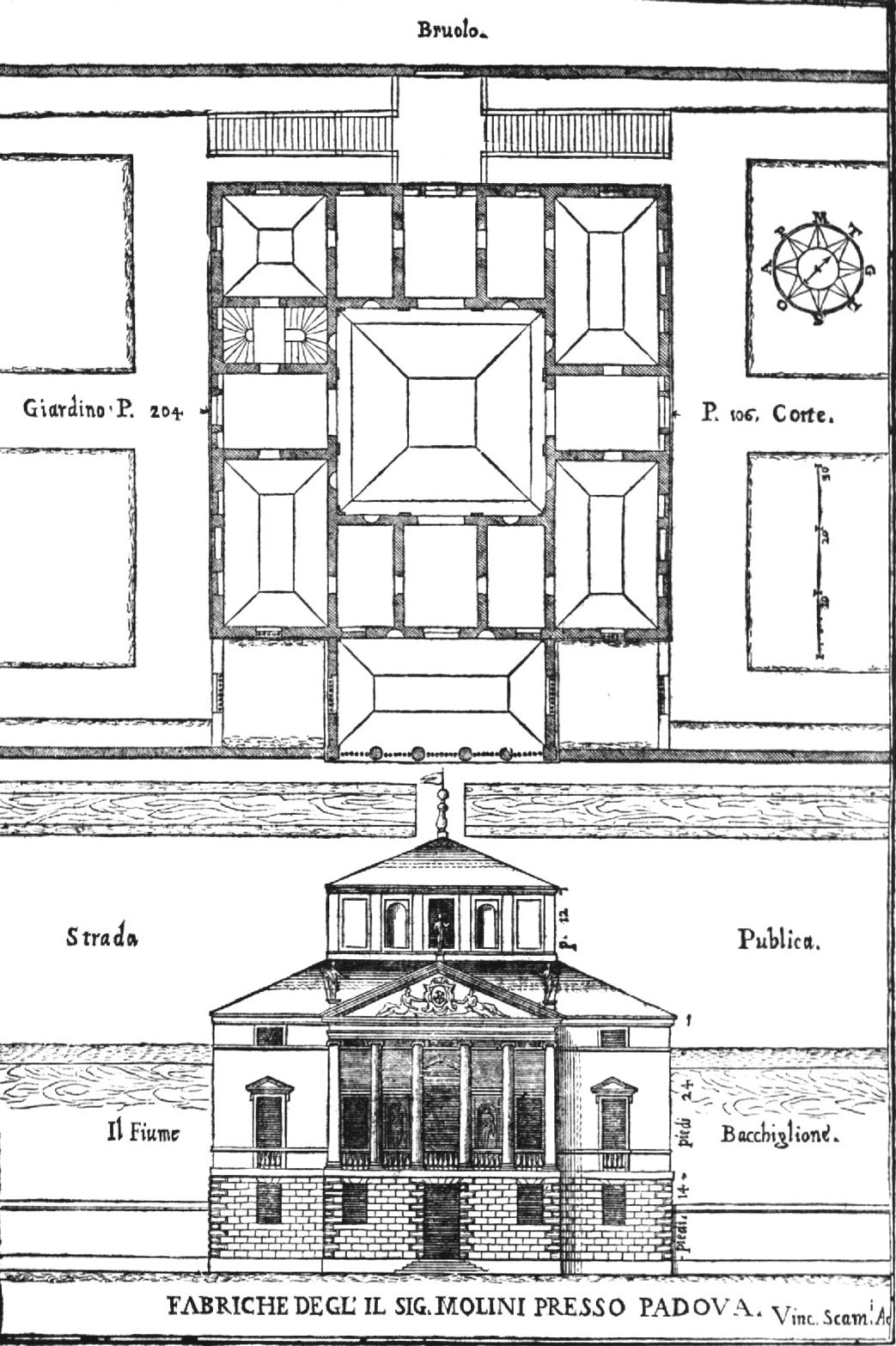 The importance of Vincenzo Scamozzi for architecture in England is of the greatest significance. A great number of his architectural drawings were available in England between 1614 and 1643. These were principally in the collection of Thomas Howard, Earl of Arundel (1585-1646) and also in the collection of Inigo Jones (1573-1652) .
In early 1613, Lord Arundel a prominent English courtier during the reigns of King James I and King Charles I, left for the continent with Inigo Jones in his retinue.
Inigo Jones (15 July 1573 – 21 June 1652) was the first significant English architect in the early modern period, and the first to employ Vitruvian rules of proportion and symmetry in his buildings. As the most notable architect in England, Jones was the first person to introduce the classical architecture of Rome and the Italian Renaissance to Britain.
Arundel had known personally the patrician Nicolò Molin (1562-1608), who had been Venetian ambassador to England for almost 27 months from November 1603 to January 1606. Arundel and Jones certainly visited Villa Molin, as is clear from Jones’s notes about it, discussing specific elements such as the vaulting used. They also may have stayed in the villa.

Soon after his return from Italy, Jones was citing Scamozzi in his preliminary design for the façade of the Queen’s House at Greenwich of 1616, where elements from Villa Molin appear, including the absence of a staircase before the façade and the rusticated ground floor with three apertures, varied by Jones with his combination of central arch and flanking rectangular windows. Another preliminary design, for the side elevation of the Queen’s House, includes projecting porticoes with arched side openings, which are to be found most clearly on Palladio’s Villa Rotunda but also at Villa Molin, which Jones knew well.

The parapet cornice of the balustrade set between the columns of the façade of the Queen’s House towards the park is also derived from Villa Molin.

As Jones notes, “the raill of the parapett or leaning must bee lett in to the boddy of the collome as I did at Greewich in ye portico tourdes the parke, and as I have seene at Ponte della Cagnia near Padoa in a villa of Clarimo Molin”

When it came to designing his Villa at Chiswick in 1726, Lord Burlington knew Scamozzi’s buildings, had acquired some of his drawings, and had read the “Idea”.

It is no surprise then that Chiswick Villa reveals his indebtedness to Scamozzi. In particular, each front is conceived in isolation and, while the side elevations are alike, the front and back are radically different, a design decision based on Scamozzi’s Villas Molin and Rocca rather than Palladio’s Rotonda. The smaller scale of Scamozzi’s villas was preferred to the larger scale of Palladio’s and Scamozzi’s classicizing architecture would have been more attractive to Burlington.

The octagonal drum and steps linking it to a saucer dome, as well as the obelisk chimmneys, are specifically borrowed from the Rocca Pisani, whereas the window type with balusters underneath comes from the woodcut of Villa Molin. The balustrade that continues between the columns of the portico and the string course running through the facades at baluster level are copied from the villa itself, as is the thermal window in the drum lighting the central hall.