Molin is a noble venetian family, one of the most prestigious families of the Repubblica Serenissima. Many members of the family held important positions.
As was common, the family had important palaces and villas in the area governed by Venice.
In 1581, according to tax declaration, the family had a two storey house in the south part of Padova  with “cortivi, horto, bruolo, colombara, pozzo, forno e chiesiola” tenuta “per uso et abitazion nostra”.
The plot of land, comprising of fifty-two fields lying between Mandria and Abano Terme, was in the possession of Donna Elena, widow of Vincenzo Molin, in 1582.
The area is in a strategic place between all the properties of the Molin family in Padova, Rovigo, Verona.

Nicolò Molin (1562-1608), who was one of the most important politician of the “Serenissima”, decided to build a new villa just outside Padova, knonw as “il palazzo al ponte della Cagna”.
Niccolò was the Venetian ambassador to Florence and to James I of England (1603-1606).

He hel the position of “savio di terraferma” (cousellor of the Republic) (1601-1603), and in 1607 he married the doughter of the Doge Marino Grimani.
When Nicolò wished to erect a villa for summer use that would be suited to the family’s social standing, it was natural to turn to Scamozzi, first among Venetian architects since the death of Palladio in 1580.
Vincenzo Scamozzi, was at that time the Proto (official architect) of the Republic, so he represented the magnificence of Venice. 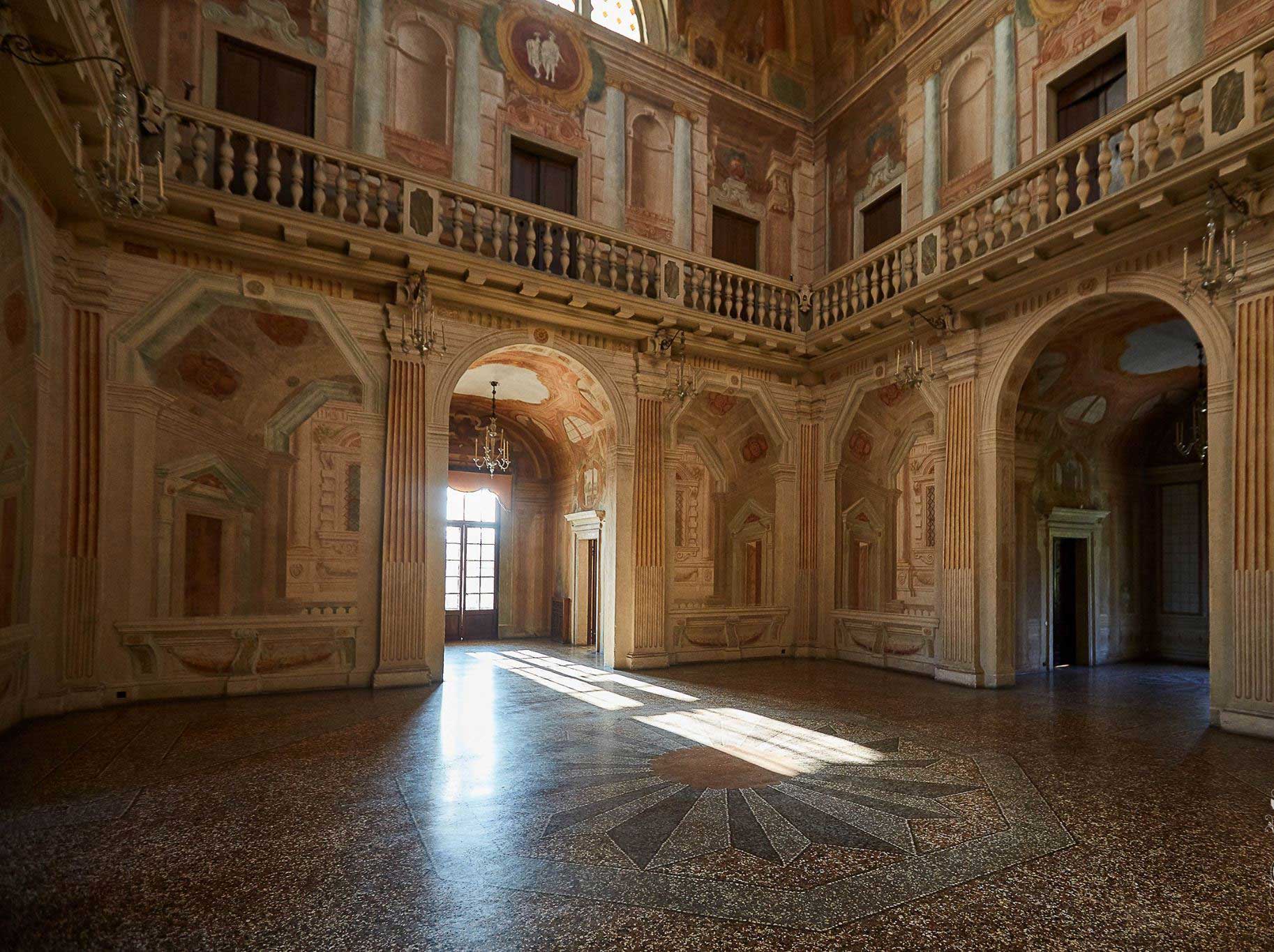 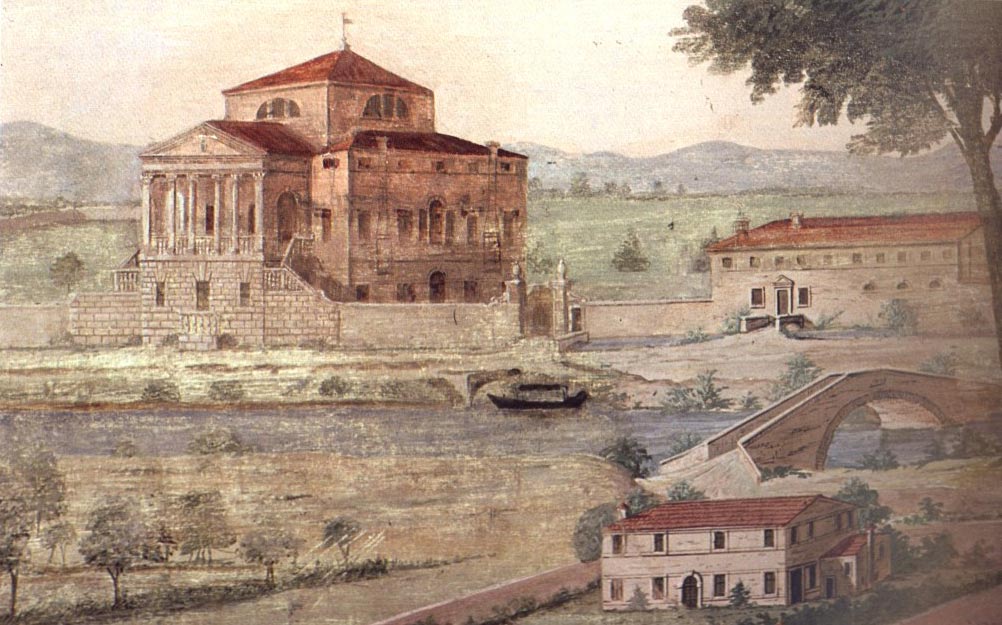 Niccolò Molin personally attended the works on the building site.
The villa was rapidly completed but not long enjoyed by its patron, who died on 9 May, 1608.
After his death the house was inherited by his brother Francesco.
Seven years later ownership of the villa was transferred to conte Pio Capodilista who had many properties in the area; it passed to his son Annibale, then to the heirs of Annibale’s sister Sigismonda. Alienated from the Conti family in 1768-72, its return was the signal for a comprehensive restoration of its interiors in the hands of conte Antonio Capodilista, a restoration imbuing the smaller rooms the rococo stucco decorations of their vaulted ceilings.
Passing through many heirs during the nineteenth century, the villa’s lands were subdivided and the villa was eventually reduced to a farmhouse before being restored by a sympathetic new owner, marquis Michele Dondi dell’ Orologio. He provided the villa with its grand exterior staircase to the piano nobile and planted the surrounding parkland with specimen trees, now at full maturity.

During World War I, the villa served as military command headquarters and was the site of preliminary negotiations that led to the signing of the Austrian-Italian Armistice of Villa Giusti on November 3rd 1918. In 1955 Villa Molin was restored again by the industrialist Igino Kofler, who replanted the formal Italian walled gardens with boxwood-edged beds. 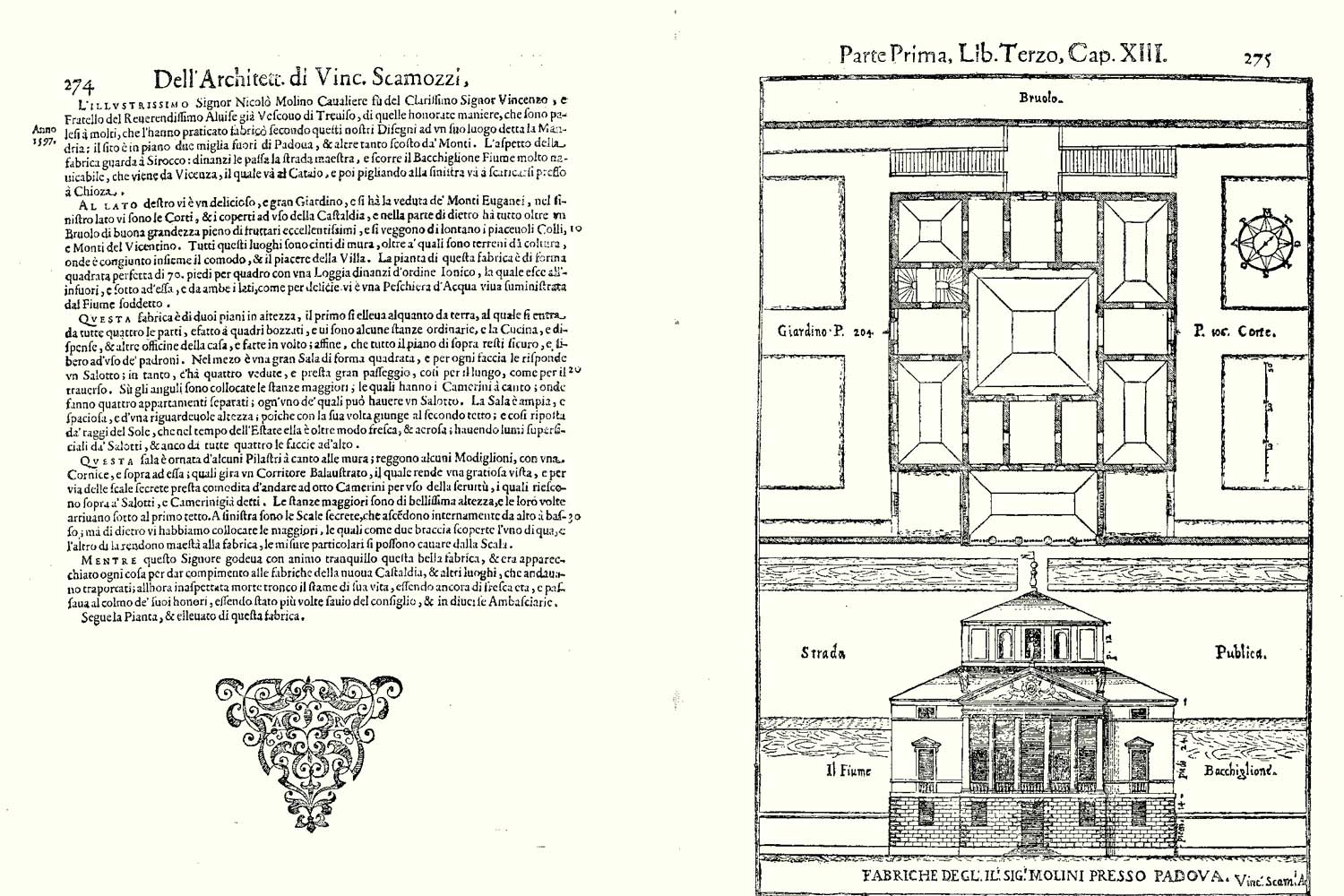 The perfect geometrical coherence of the villa is the trademark of its creator and one of the distinctive features of the building.

The interior of the villa is truly magnificent and is even more stunning than the exterior.

The stucco-faced structure is built on a perfectly square plan, raised on a highly rusticated service basement with an Ionic portico, lifted well above the public towpath and facing the Canal. This primary façade of the villa is reminiscent of Andrea Palladio’s Villa Rotonda or the Villa Foscari (called “La Malcontenta”).

Scamozzi was responsible for the completion of the Villa Rotonda after Palladio’s death, and designed the low central dome modelled on that of the Pantheon with a central oculus.

The solid sides of the porticos are pierced by grand arch-headed openings to provide additional breeze in the summer heat. 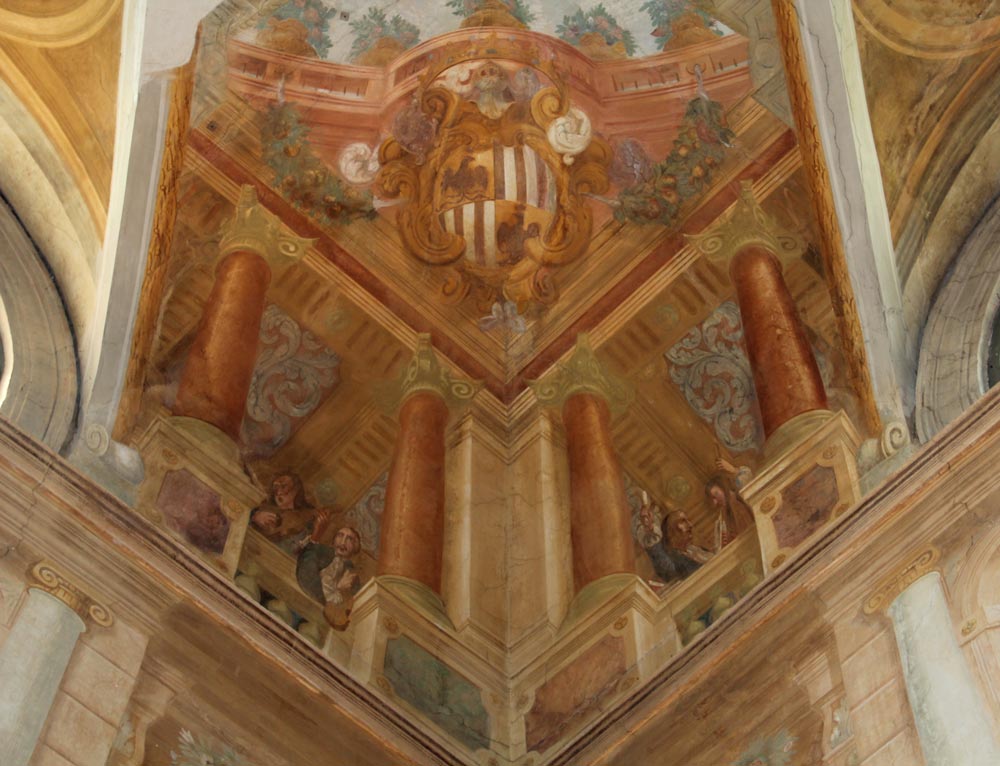 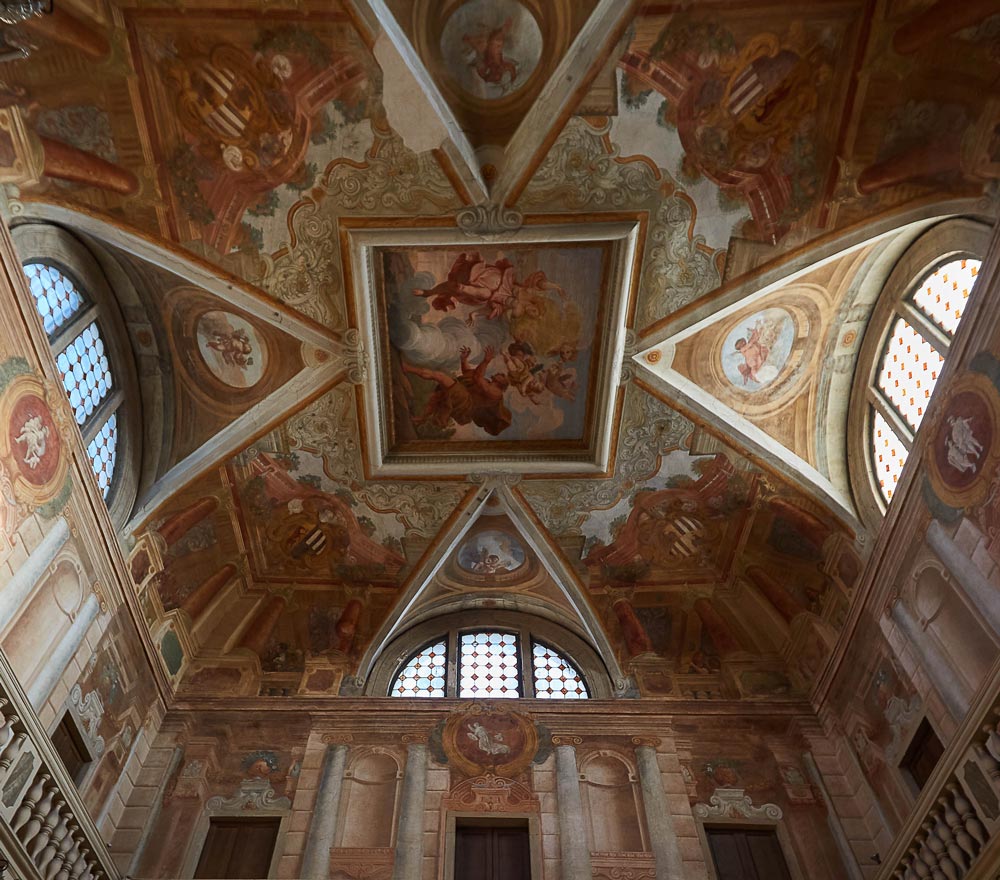 The decoration of the room recalls typical Renaissance elements, such as serlian windows on the first floor and the regular geometrical shape of the plan and the facades.

The villa’s other façades are simply treated and harmoniously symmetrical, with central Serlian windows, surmounted by the rectangular lanterna formed by the high cubical central room that rises through the center of the roof, lit by tripartite lunette windows on each face.
The grand central room, thus enclosed, is frescoed with feigned architecture — niches, columns, balustrades — and flanked by symmetrically arranged smaller and lower barrel-vaulted rooms that are linked by generous arched openings.

Within, there is an articulated central reception space in the form of a Greek cross. The vestibules give way to more intimate spaces, in a series of cubes, double cubes and “golden mean” rectangles characteristic of cinquecento villa floorplans (See Rudolf Wittkower, Architectural Principles in the Age of Humanism, The Warburg Institute, London, 1949).

Unlike Palladio, who designed the courtyard as an empty space or as a linking element between different buildings, Scamozzi considered the empty parts as the physical and conceptual barycenter, which is generally square shaped and bordered by stucco decorated facades.
In villa Molin this is represented by an extraordinary heightned ceiling of 12 m, almost a covered courtyard.

The elegant ionic pronao faces the road reflecting on Canale Battaglia: the “loggia” ideally dominated the whole area and, from that, Nicolò Molin could view all of his properties.
On the front we can see the coat of arms, made of marble, of the Molin family, a mill (mulino in Italian) and three “statue acroteriali” (statues) on the top.
The portico with six Ionic columns recalls Greek temples, a typical feature of the villas.
The original Ionic diagonal capital are called “capitelli scamozziani” and are inspired by the capitals of the “Tempio di Saturno” in Rome, that Scamozzi visited while in Rome during his research on classical architecture. 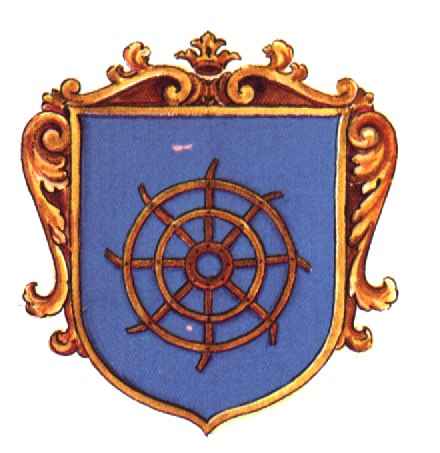 The elegan ionic portico faces the road reflecting on Canale Battaglia: the “loggia” ideally dominated the whole area and from that Nicolò Molin could view all of his properties.

The lateral facades (north and south) have the typical features of Venetian buildings of the period, with chimneys and no architectural signes.
Also the Serlian window has no capital and the only prominent element is the “architrave”.

There are no stone elements a part from the windowsills.

John Soane was one of the greatest admirers of Scamozzi and he came to Italy to visit and study his works, leaving his commentaries and beautiful scketches.

Inigo Jones, during his grand tour to Italy in 1613-1614, visited villa Molin and cited it in 1636 in his essay on the coloumns and balustrades.
He said that he was inspired by the columns of the loggia without any basement: “come ho fatto a Greenwich, nella loggia verso il parco, e come ho visto a Ponte della Cagnia vicino a Padova in una villa del Clarissimo Molin”.

“The raill of the parapett or leaning must bee lett in to the boddy of the collome as I did at Greenwich in ye portico tourdes the parke, and as I have seene at Ponte della Cagnia near Padoa in a villa of Clarissimo Molin” 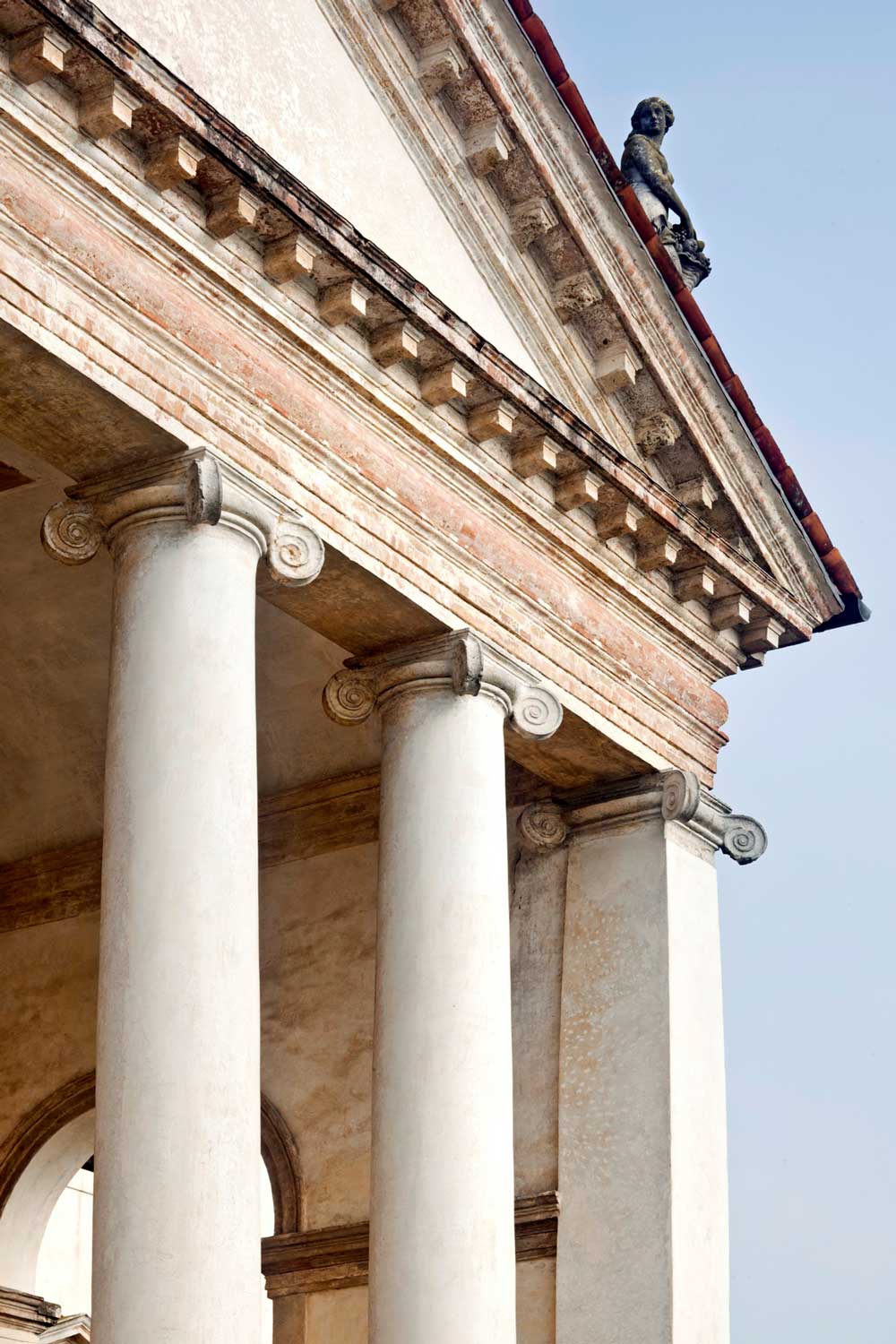 Inigo Jones, note in his copy of the Quattro Libri, Book I, 54